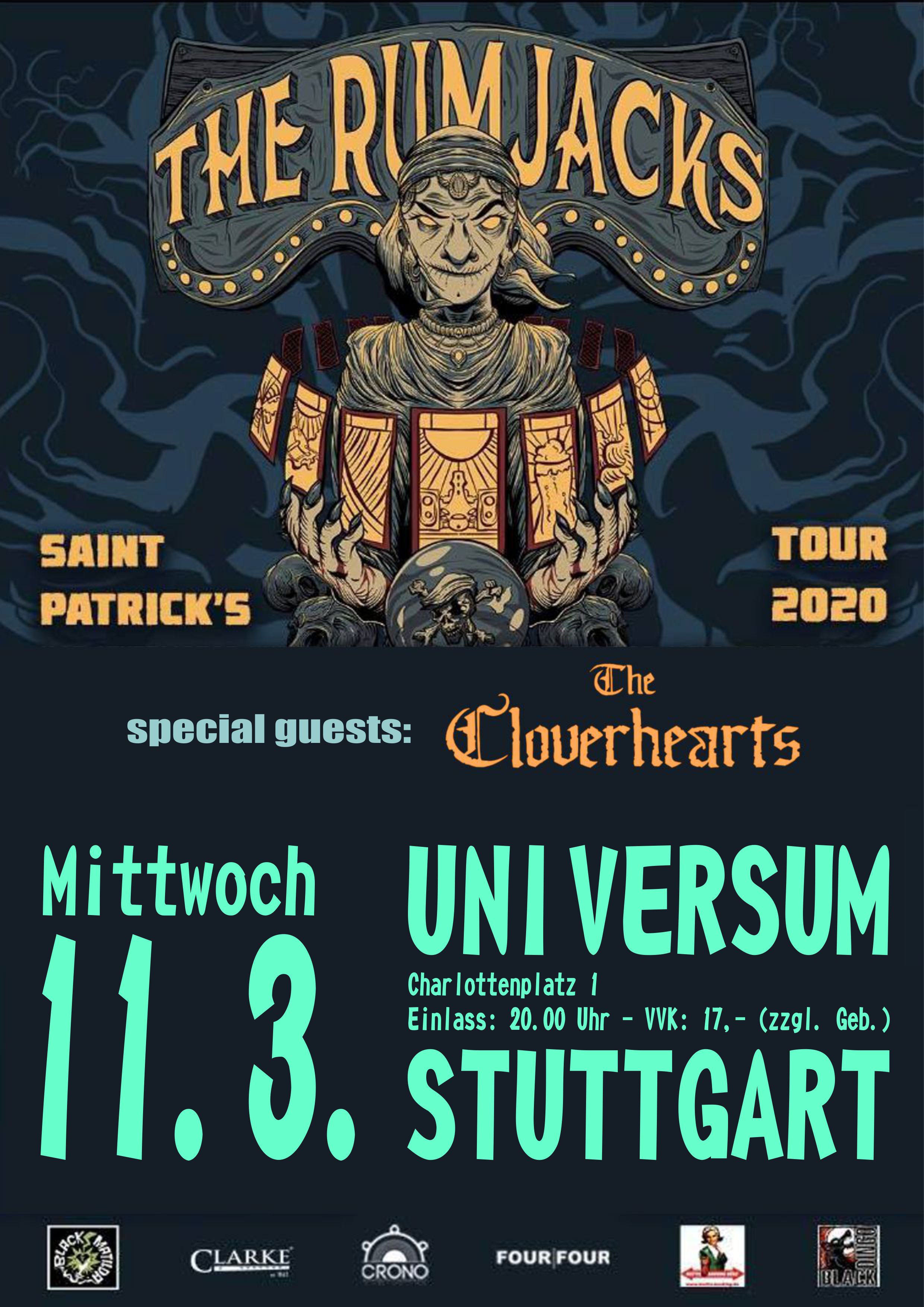 THE RUMJACKS
Its like growing up with a tear in your eye and a storm brewing in your heart.. muses frontman Frankie McLaughlin on the musical heritage of the group. We were raised on the Scottish & Irish music in our parents record collection, before colliding head-on with Punk Rock as we grew older & thought we knew everything.
These two immovable pillars define The Rumjacks above all else, as they continue to cut their own path through the tangled musical landscape before them. Their own brand of Celtic Punk has seen them release two EPs  Hung, Drawn & Portered & Sound as a Pound (09), as well as three powerful full length albums  Gangs of New Holland (10), Sober & Godless (15), & Sleepin Rough (16).
Since the bands inception in Sydney, Australia in late 2008 when McLaughlin met Bassist Johnny McKelvey, they have racked up millions of YouTube views, with over 24 million of these alone for their breakthrough track An Irish Pub Song. Other stunning videos that capture the incredible live energy of the band include Uncle Tommy, Blows & Unkind Words & Plenty, while Crosses for eyes and Me Old Ball & Chain see them hard at work in the studio.
The videos for Home, One Summers Day weremade while The Rumjacks were on tour, and stand testament to the bands enormous appeal wherever they go.

Their incendiary live performances and seemingly endless touring regime has seen them share the stage with acts as diverse as Dropkick Murphys, The Interrupters, Anti Flag, CJ Ramone, The Real McKenzies, Gogol Bordello, Ruts DC, Guttermouth, GBH, UK Subs and The Aggrolites. Were at home on any lineup in front of any crowd, I think there are elements of what we do that must appeal to just about anyone.
Indeed there are  from their heavy Celtic roots to the driving punk rock or even ska/reggae rhythms, well-oiled sing-alongs & choking ballads. We draw on so many influences, but still its important for us to force the bounds of what we already do, play good solid Punk rock with a fat smear of Celtic folk right through it, Hopefully contributing something fresh & substantial thatll stick around in peoples hearts long after the partys over..
2015 marked a real tipping point for the band, when after wowing home crowds with several appearances at the prestigious Byron Bay Bluesfest in Australia, they embarked on a hugely successful tour of Europe playing to over 50,000 people. Absolutely crushing just about any bands must do list, they took in the likes of Boomtown Fair (UK), Montelago Celtic Festival (Italy) and Jarocin Festival (Poland), as well as sell-out shows at many iconic club venues like The Garage (London), Wild At Heart (Berlin) and Rock Cafe (Prague).
Barely stopping to cool their jets, the band made a triumphant return to the festivals and concert halls of Europe & The UK in 2016, playing almost a hundred dates over some 24 countries. Inciting hysteria & pushing their own physical barriers as they went, the boys chalked up plumb appearances at some of Europe's hottest festivals, including; Punk Rock Holiday, Lowlands Festival, Exit Festival, Rock marathon, Mighty Sounds, Germany's Taubertal & Open Flair Festivals, and Woodstock Festival in Poland, attended by half a million people. Somehow in the midst of all this they managed to release their third album 'Sleepin' Rough. Along with two dynamic new videos for the singles 'A Fistful o' Roses' and 'Patron Saint o' Theives' (the latter shot in Poland on a rare day off during their EU tour) the album has been met with critical acclaim the world over.
2017 see's The Rumjacks make their long awaited maiden foray into the USA & Canada. Where they will tear their way around from San Diego's tin roof in the gaslamp quarter, through New Orleans, Austin Texas for the SXSW Festival & up along the east coast into Canada. They'll return again in September after some more EU summer shows, to headline Californias Get Shamrocked festival.
Watch this space.. though dont blink, or youre likely to miss em.

THE CLOVERHEARTS
From false friends, to (temporary) sobriety, to lovable junkies, to the worlds worst public transport. However you like your Celtic PunknRoll - The Cloverhearts have you covered.
Formed out of the mutual love for catchy melodies, skull-crushing drum onslaughts, tin-whistle ear-worms and energetic live performances; Australian vocalist/songwriter, Sam Cooper and Italian Tin Whistle and Bagpipe-Extraordinarie, Chiara de Sio first met at a Rumjacks show in Manhattan, New York fresh off de Sios departure from her former project, The Clan.
Fast forward a bunch of hangovers, Cooper and de Sio are now joined by guitarist JJ Bassi, bassist Stefano Cione Becce, and drummer Christian Amendolara with an arsenal of Celtic/Punk ear candy, and plans on many more hangovers (and rock shows) to boot. VVK