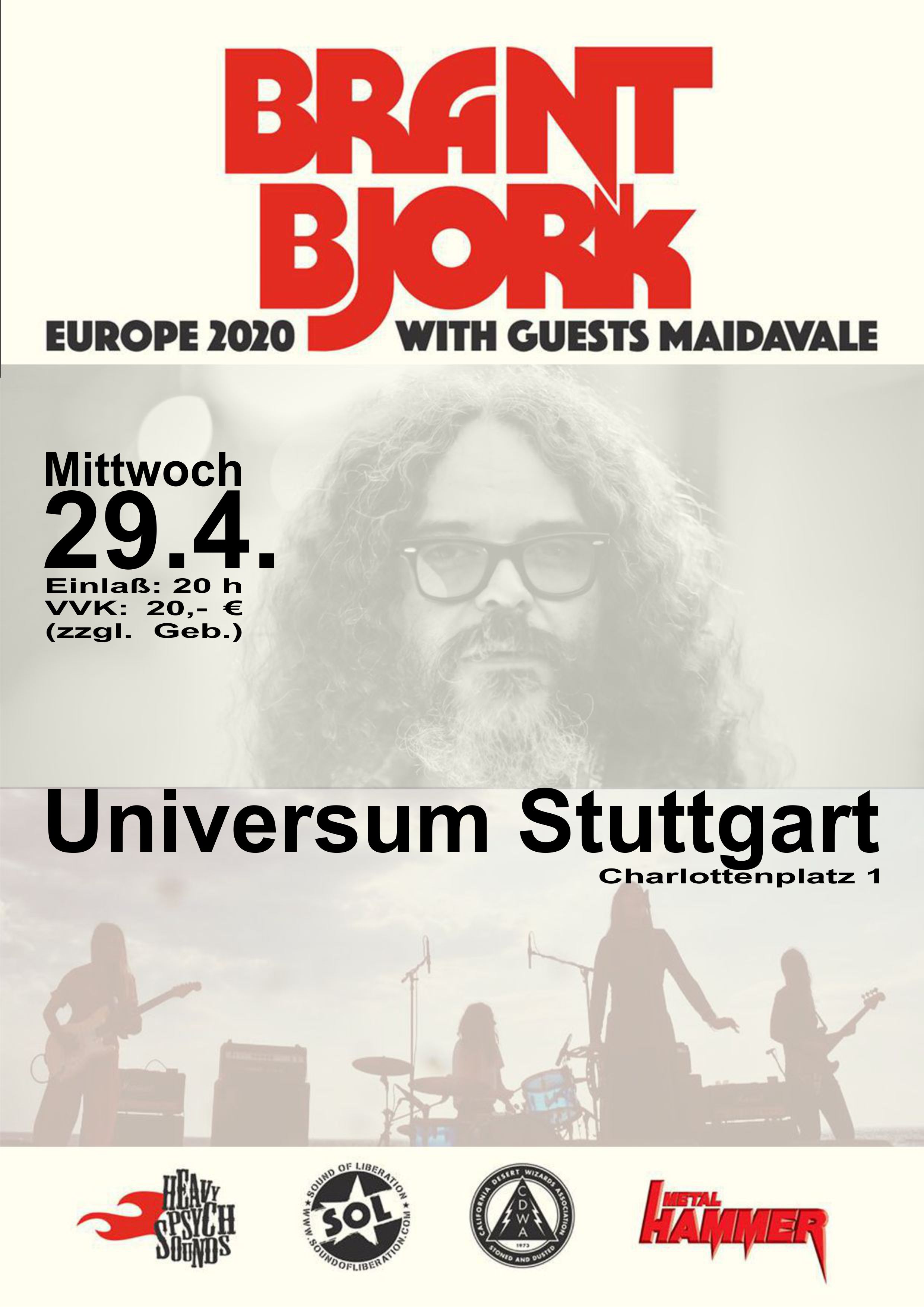 BRANT BJORK
hails from Palm Desert, California, where he began gigging at the age of 13. By high school Brant had begun Kyuss with locals Josh Homme, Chris Cockrell, (later Nick Oliveri) and John Garcia. Kyuss was signed to Elektra and became the first desert rock band to achieve international success by spearheading a musical movement that brought heavy and psychedelic sounds back to rock and roll and served as a prototype for all desert/stoner rock.

Feeling the need to embark on his own personal musical journey, in 1999 Brant released his first solo record, "Jalamanta", on premier independent label, Mans Ruin. Brant plays all of the instruments on the record and sings with such a quiet soul and conviction it not only confirmed him as one of the baddest rock drummers of our time, but also legitimised him as a premier talent on all levels. Over the following decade, Brant and his 'bands' (lineup changed many times, just as the band's name) released 8 other albums and toured all over Europe, The States, Canada, and Australia. Their live shows were fast becoming recognized as the best live rock and roll going and as Aussie rag put it, The closest thing well get to seeing the Hendrix Experience.

Back in 2014 (after 4 years relatively quiet), Brant Bjork signed with Napalm Records and released with his "Low Desert Punk Band" his first album on the Austrian Label, "Black Power Flower" proving once again that his multi-instrumental skills know no creative boundaries. With his excellent occupied Low Desert Punk Band, Brant lets the scorching heat of Nevada shimmer in his songs. He also scrubs his guitar through all sorts of psychedelic effect pedals and skillfully mixes Stoner Rock, Blues and Doom-bonds to a feverish hazy brew. On September 2016, the Low Desert Punks released their second album "Tao Of The Devil" via Napalm Records.

Now at the end of 2018, Brant Bjork unleashed his 13th solo album, "Mankind Woman", which will was released via Heavy Psych Sounds in September. Although this is indeed a Brant Bjork record it is the first record he solely collaborates with a producer and co-writer, his LowDesertPunkBand guitarist and friend, Bubba Dupree. They describe the sound of "Mankind Woman" as modern classic. It is evidently clear that both Brant and Bubba specialize in the craft of the sound and feel of the music spawned in the 60's and 70's and this record is undoubtedly a testament to this great era of song and sound, however the intention was not to try to recapture or mimic in retro terms these influences but to strive for a contemporary quality.

MAIDAVALE
Swedish MAIDAVALE is the grooviest star rising in the skies of heavy psychedelia. The four-­piece unit with influences that ranges over decades have created a sound based in the late 60s rock scene. Though both their influences and style are deeply rooted in that period, the bands character lives on its own outside the frames of that treasured timewarp.

MAIDAVALE released their debut album "Tales of The Wicked West" on The Sign Records in August 2016. It was successfully received and brought the band to 12 different countries during 2017, with highlights such as Freak Valley and Red Smoke Festivals. Before even releasing their first album, MAIDAVALE played festivals like Sweden Rock and Muskelrock  building their reputation as a stirring, charismatic live band. With a personal and reinventive take on psychedelic rock and a furious groove they enchanted every audience that came in their way.

MAIDAVALE are currently in the studio breaking new grounds that will result in their second album. The new album "Madness is too Pure" came out in March 2018, following the release of a first single in late January. With their second album MAIDAVALE continue strongly with a more upfront, atmospheric and experimental sound  yet with the distinguished groove that is characteristic for MAIDAVALE.